Congratulations to the individuals that have qualified from our long course training team (we were allotted 14 slots) to compete in the State Swimming Championships (I know we have some going from our developmental team, but I don’t have their names – I will post these as soon as I get them) Cory Boone, , Emanuel Cordono, Gregg Dedic, Jesse Greve, Nicole Harrold, John David Haywood, Mark Lano, Maisha Louis-Jeune, Jason Munoz,  Amanda Rivas, Ian Soules, Lori Thomas, Michael Tortorella, and William Westman. These individuals all won two individual blue ribbons each in the area games.  We are all very proud of you guys and gals.  We have a strong team going to the state swimming championships.  Over half of our athletes that are attending the swim meet are current team record holders. As soon as I get the State Meet information I will post it.

We have only two more practices until State Championships, so please show up – even if you are not attending the state meet we would still like to see you all in the water we are all still part of the team.

Where was Coach Lucky at Area Games?   He was shooting a zombie video for a sizzle reel to be pitched to networks as a possible show (unfortunately that was the only day all the cast and film crew could get together to do the shoot). If you are interested in being in one of Lucky’s zombie films, in the future please, please sign up for email updates to the Zombie Cause Blog and watch for casting calls. Growing Bolder TV filmed a behind the scenes segment on the filming of Coach Lucky’s Zombie Cause – you can watch the story here. 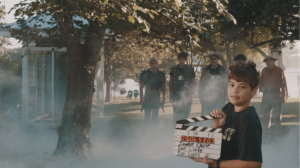