Congratulation to all of our swimmers that participated in the National Cognitive Disabilities Championships last weekend. Many of our swimmers had personal best times and we had a total of 5 swimmers set 9  new team records (and the season is early). Ian Soules led the record breaking charge by setting three new team records the open and junior 100 Breaststroke  1:49.9 and the Junior 200 Breast with a time of 4:07.2.Jesse Greve added to the record breaking by busting two of his own records in the 100 and 200 freestyle in the open division  1:05.8 and 2:25.5. Lori Thomas led the woman’s side with two records the open 50 free 44.6 and the open 50 fly  1:04.0. Two other swimmers each had a single team records broken, Lauren Bergquist 50 free junior division  51.5  and Trisha Spaulding in the masters 50 fly 1:24.3.  We also had several National Champion winners: Jesse Greve, Greg Dedic, Maisha Louis-Jeune, Lori Thomas, Chad Van Scooter, Ian Soules, Steven Deutch,William Westman, Michael Tortorella, and the  Man o War men’s medley relay,

Party at Lucky and Jacquie’s on Saturday morning at 9AM.  Bring suits and towels – doughnuts and drinks will be there.  Map to Lucky’s house here: 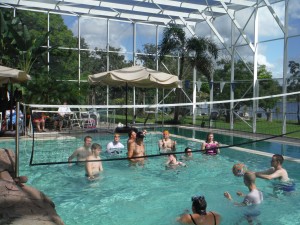 All the cool people played water volleyball last year and everyone had a great time.